Our Recent Survey Consultation | The Results Are In…

Previous
Our Recent Survey Consultation | The Results Are In…

It is with great excitement to release the results of our recent survey consultation which explored the use of Apprenticeship Management Software solutions and the preferences of Training Providers and End Point Assessment Organisations.

Upon measuring feedback, it quickly became obvious that users of ACE360 placed great importance on ease of use, cost-efficiency and the ability to seamlessly collaborate with their delivery and assessment partners.

Questions covered a variety of subject matter from user experience to feature and benefit preferences in order to gauge customer satisfaction, and to also identify the needs and preferences of non-ACE360 users. This survey constitutes part of our ongoing commitment to ensure that our Apprenticeship Management Solution best meets the needs of our valued users.

So, without further ado, let’s get stuck into the detail of the results!

When asked what the respondent’s role within their Organisation is, the majority of respondents declared that they are their Organisation’s decision maker in regard to adoption of new processes/IT systems at 75%. Following closely behind in second place were system users who are involved in training at 69.09%. In third place were users who are involved in End Point Assessment at 53.64%, with only 28.18% noting that they are Apprentice employers.

When looking at the industry route through which users operate, the highest proportion of industry routes were within the business and administration fields at 56.36%, with digital and engineering and manufacturing tied in second place at 34.55% and education and childcare in third place at 31.82%. 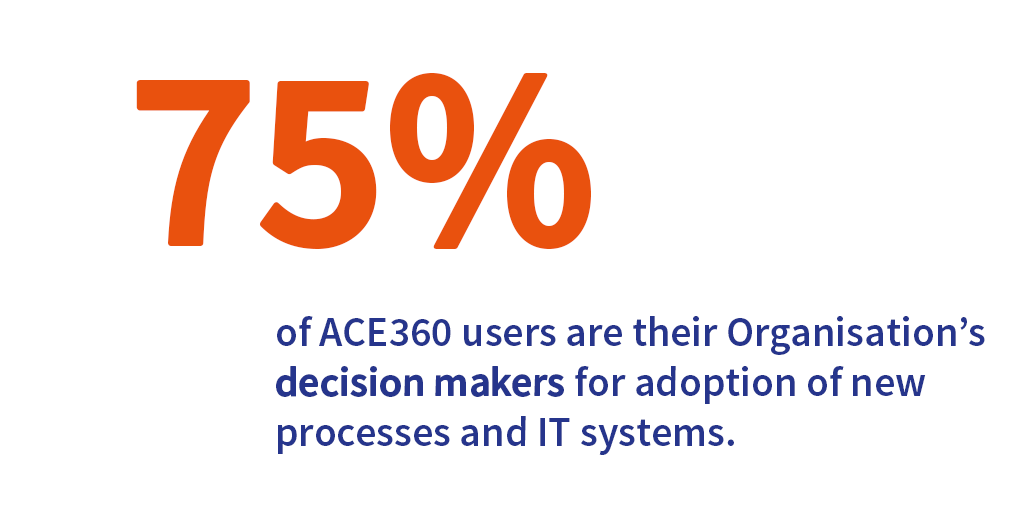 What Are The Benefits Of Using ACE360?

Unsurprisingly, achieving a streamlined and efficient process ranked as the most important benefit of using ACE360 at 81% of respondent answers closely followed by improved quality of delivery at 29% and surprisingly followed by the cost-saving elements.

Despite this though, respondents also noted that achieving improved customer service through use of ACE360 was important, whilst also listing many other qualitative responses ranging from making EPA easier to the system’s ability to compile and report data intelligently. 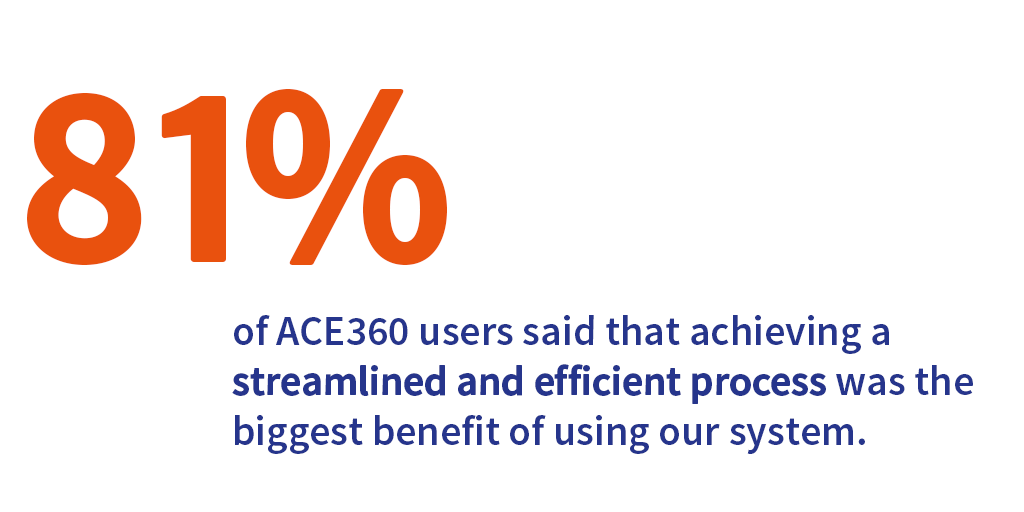 Why Did Users Choose ACE360 Over Other Alternatives?

This open ended question prompted interesting answers, with many choosing ACE360 for its cost-effectiveness, because they were referred by their delivery or assessment partner, ease of use, customer training and ACE360’s close ties with the previous ACE system for framework Apprenticeship Certification which evidently makes for a familiar user experience.

How Satisfied Are ACE360 Users? 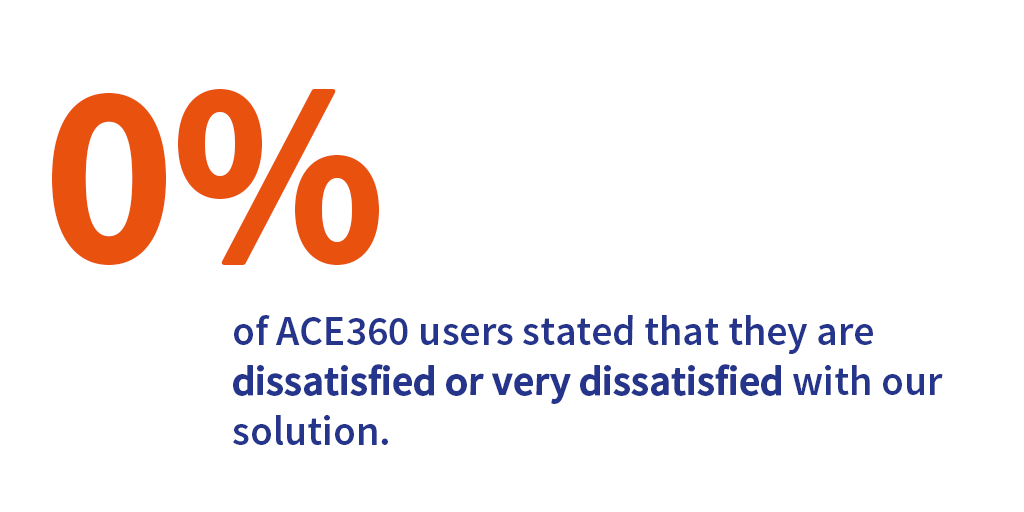 Would Respondents Recommend ACE360 To Others?

We are glad to see that 79% of respondents said they were either likely or very likely to, or already have, recommended our system to others. Some 20% of respondents said they were neither likely nor unlikely to recommend ACE360, again mostly due to many of our users being referred by their delivery or assessment partners and having no specific feelings about what they perceive as a necessary part of their day-to-day processes. 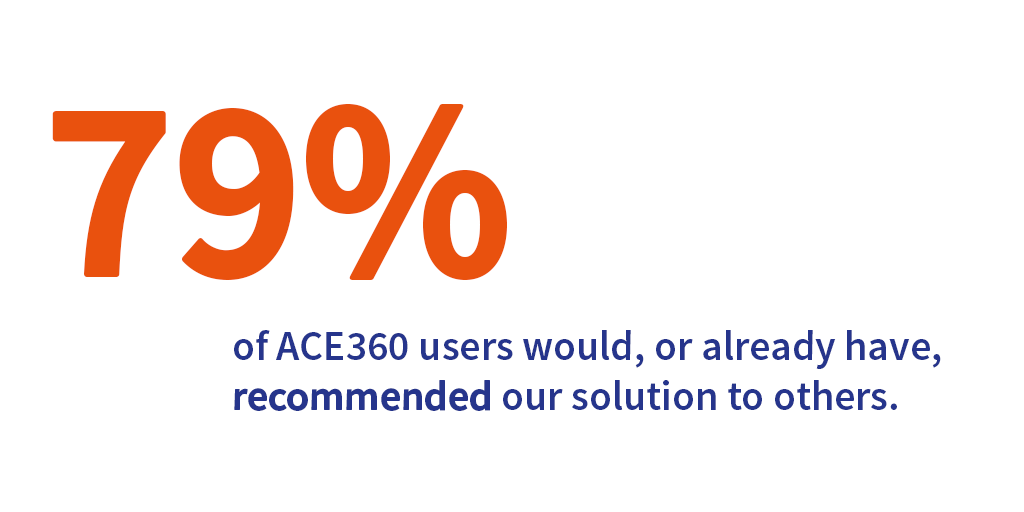 What Features Help Our Users The Most?

When asked to rank a list of all ACE360 features that apply to them, rating them from most helpful to least helpful, we found that our dashboard feature – which gives a complete overview of Apprentice progress and activity – came in 1st place with 69.9% of respondents rating this the most important. In second place was gateway acceptance/rejection (multiple attempts) at 65.9% and working with files (uploading, downloading and previewing) at 62.9%.

Taking a closer look at other features, most users rated our managed standard database, our assessment scheduling & booking tool, being able to manage records through search filter and export features, accessing EPAO guidance through our knowledge base and our file sharing functionality as being among the most helpful features.

Delving into enhanced features, our users rated automated notifications/email alerts, system flags such as EPA project due dates and our remote assessment integration such as virtual meeting recording autosave as the top 3 enhanced features. 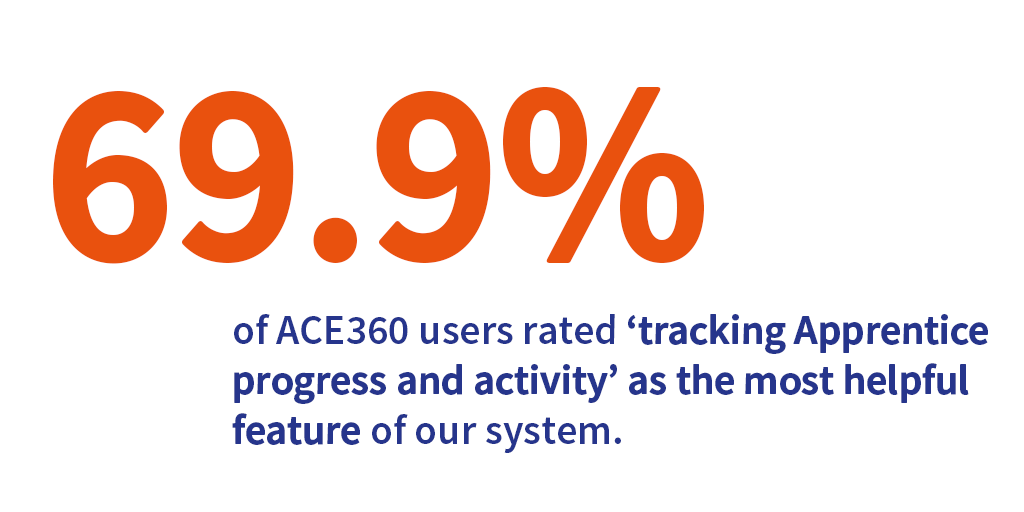 Which Services Of ACE360 Were Ranked Most Important?

Unsurprisingly, our industry-leading team’s ability to provide ongoing training and support as the most important service benefit, which was closely followed by our team’s approach when personally setting up new users and introducing them to the system. Following a similar theme was our ‘after sale’ resources and training guides, which came in 3rd of 7 features listed. 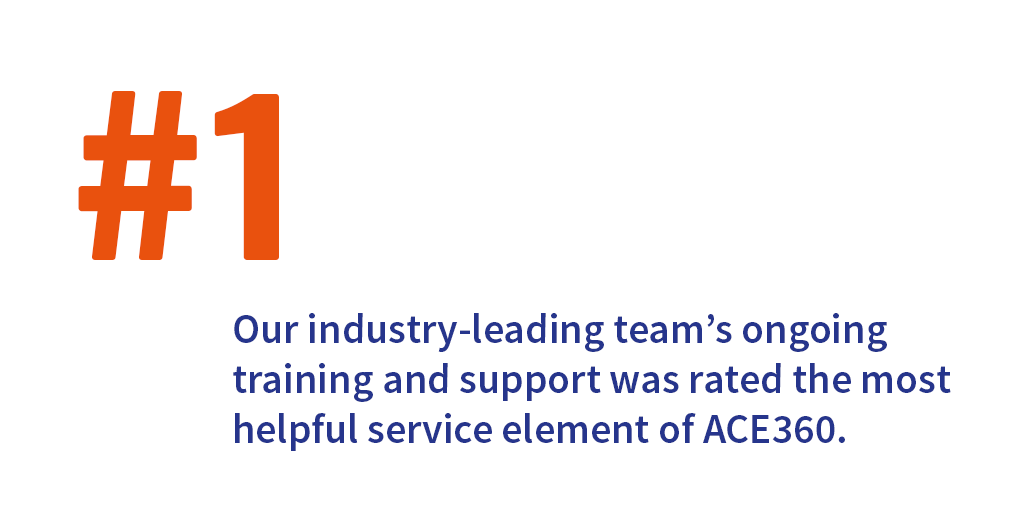 Do ACE360 Users Use Other Apprenticeship Management And EPA Systems Alongside ACE360?

Of the 110 respondents who answered, 76% also used another system alongside ACE360 due to the demands of their EPA / delivery partner/s using a variety of systems also, with 24% stating that ACE360 is their sole Apprenticeship Management System.

What is clear is that ACE360’s ability to seamlessly integrate with other systems allows our users to jump between different solutions as per the request of their delivery of assessment partner/s needs, without convoluted processes. 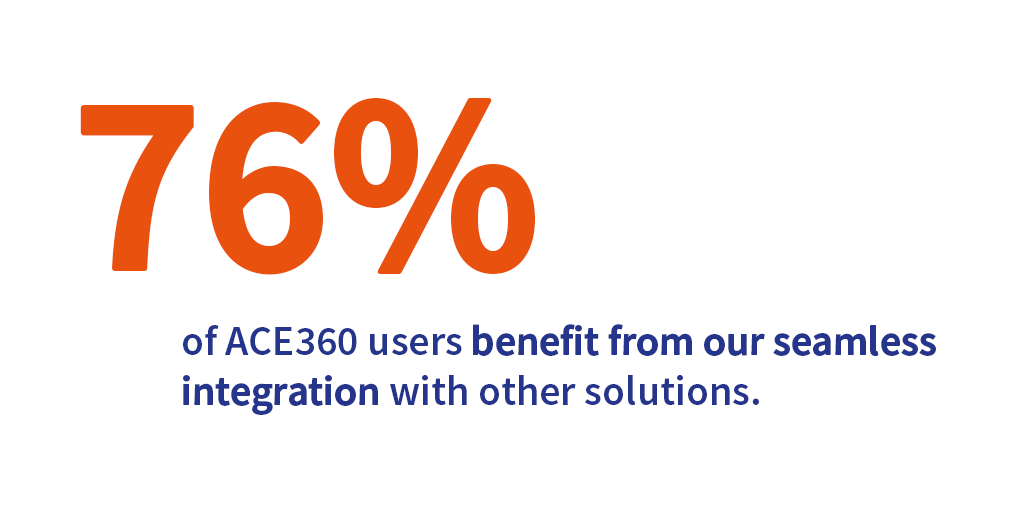 How Do ACE360 Users Rate The Cost Of ACE360 Compared To Competitor Systems?

The vast majority of respondents, 93.4% believed that our system provided either excellent or good value for money. A total of 4.72% of users rated our system expensive and a very marginal 1.89% of people rated ACE360 very expensive. Interestingly, when prompted to explain their reason for believing ACE360 is expensive or very expensive, many mentioned that they did not know competitor pricing and that it was difficult to gauge. 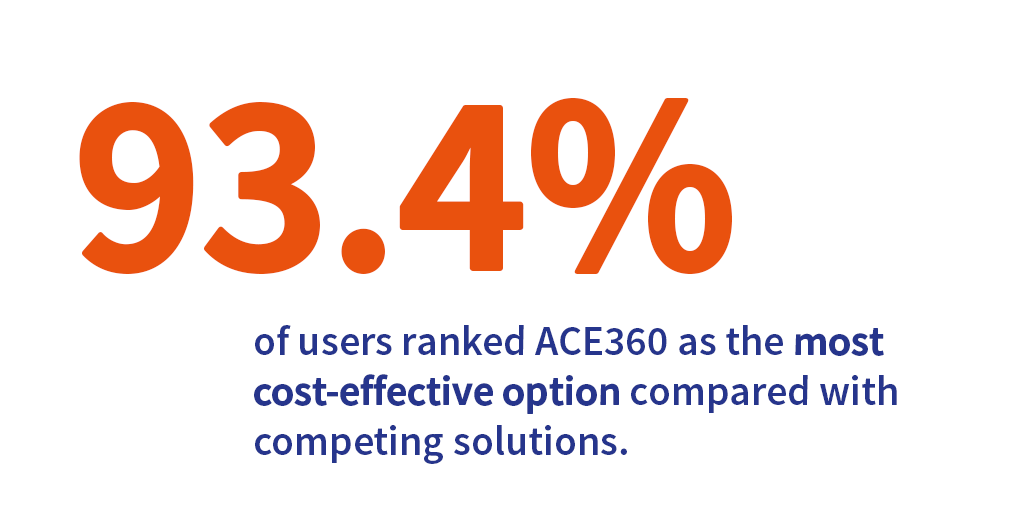 What Features / Aspects Of An Apprenticeship Management System Are Most Helpful To Non-ACE360 Users?

When asked to rank each listed feature from 1 (most important) to 3 (least important), two features stood out to the respondents that do not use ACE360. In first place was assessment scheduling and booking capabilities at 75%, followed by resits/appeals with reasonable adjustments at 66.7%.

Respondents also noted that the following features were also valued:

The key takeaway here is that although these respondents don’t use ACE360, their needs and preferences are broadly similar to those of existing ACE360 users, who also place importance on scheduling and booking capabilities. 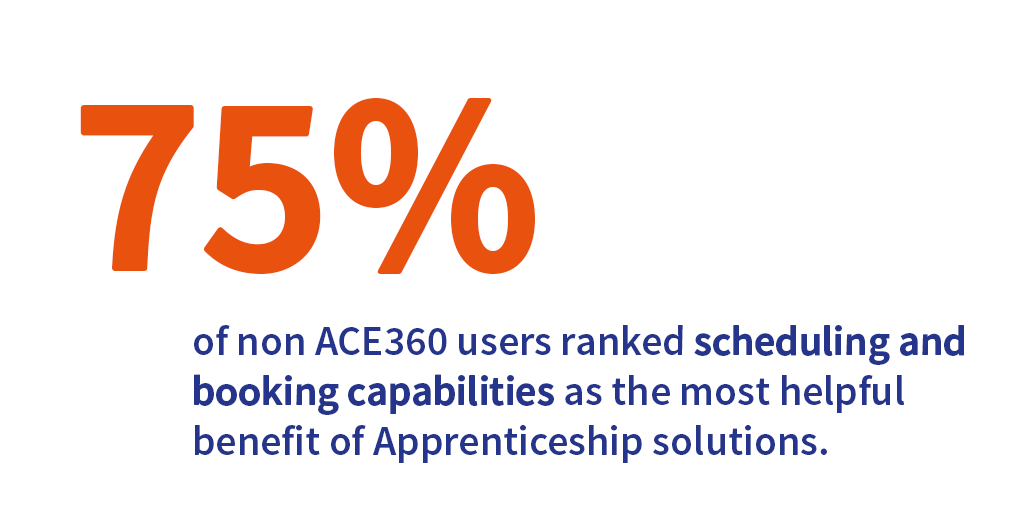 Which Charging Models Were Preferred By Users?

By far the most preferred charging model was ACE360’s existing charge per Apprentice record approach at 59.1%, followed by an annual system license fee (based on volume of Apprentice assessments) at 25.45%. In third place was an all-inclusive subscription fee based on volume and services provided at 20%. With only 7.27% choosing option 4, the minority of users would prefer an annual API fee, based on our system being linked to their current system/s.

We take this as good news as our existing charging model is preferred by the majority of users and is clearly favoured for its unique pay as you go approach which provides flexibility to the various sizes of training and assessment organisations. 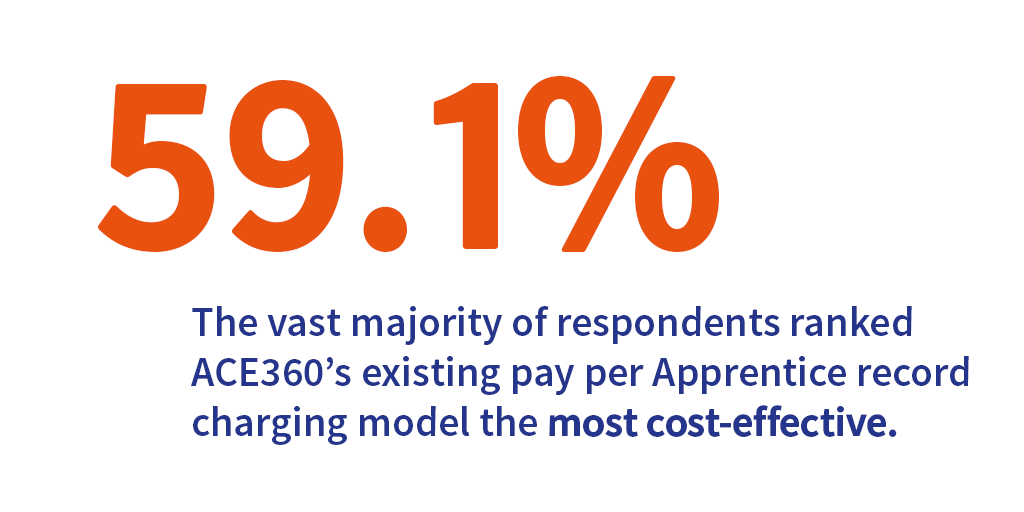 As a result of this feedback our development team will be honing-in on these features that our users love and refining the ones that could further serve them.

We would like to congratulate the randomly selected winner of the ipad and thank those who took the time to answer our survey. It is because of you that we can ensure our industry-leading system continues to benefit our valued users in the best way possible.